Building a Legacy to Preserve Our Catholic Faith and Heritage

The Saint John Paul II Legacy Society, a special part of the College’s President’s Council, was founded in 2017 in order to honor those remarkable men and women who help restore Christian culture through a legacy gift or gift plan, of any amount, to Christendom College. Such gifts might be through a will or trust, a life-income plan such as a charitable gift annuity, designating the College as the beneficiary of a life insurance or retirement plan, or other special planned gifts.

As a member of The Saint John Paul II Legacy Society, you will continue to make an enduring impact on the Catholic faith for generations to come.

Why is our namesake Pope Saint John Paul II? 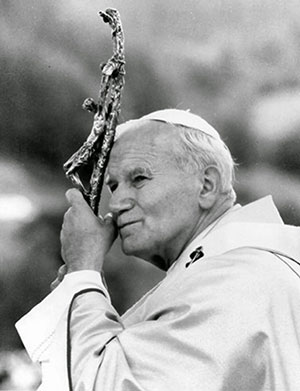 Your legacy gift is ensuring the education of future leaders of our Church and nation. Your passion for the formation of young people in the truth carries on Pope Saint John Paul II’s defense of education and our Catholic youth.

Christendom College was blessed with a special relationship with Pope Saint John Paul II since his election in 1978. The College was founded only a year prior, in 1977, by lay Catholic educators on the foundation of the principle of fidelity to the truth of the Catholic faith.

Pope Saint John Paul II, in his apostolic constitution Ex corde Ecclesiae, calls on the Catholic university to “consecrate itself without reserve to the cause of truth,” to distinguish itself by the “free search for the whole truth about nature, man, and God.”

You are fulfilling this call by enabling Christendom College to form its students using a challenging curriculum centered on faith and reason—on the truths of Divine Revelation as taught by the Roman Catholic Church, and the truths of natural reason as derived from natural law and human experience in fidelity to the Magisterium. 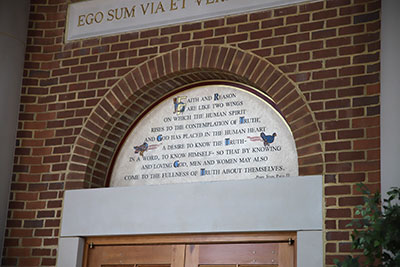 Pope Saint John Paul II’s words defending the unity of faith and reason grace the entrance to our library.

Your legacy gift allows the College to fulfill the goal set for it from the beginning: to provide a truly Catholic liberal education in fidelity to the Magisterium of the Catholic Church and thereby to prepare students for their roles, as laity in Christ’s Church, of restoring all things in Christ.

Together, we will be unwaveringly loyal to the College’s founding purpose and actively responsive to the repeated calls of Pope Saint Paul VI, Pope Saint John Paul II, Pope Benedict XVI, and Pope Francis for authentically Catholic colleges and universities that educate our youth in the truth. 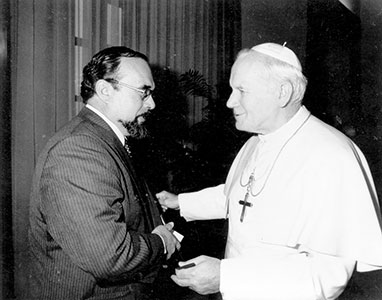 Moreover, Christendom has been blessed with many personal interactions with Pope Saint John Paul II.

In 1992, just prior to his appointment as the third president of Christendom, Dr. Timothy T. O’Donnell led a pilgrimage to Rome in which Dr. Carroll participated. Near the end of the trip, on June 1, the pilgrims were granted a private audience with the Holy Father, Pope Saint John Paul II (see here to watch the video recording of that audience). The Vicar of Christ smiled upon Dr. Carroll and the group and, after Dr. O’Donnell introduced Dr. Carroll as the founder of Christendom College, said to Dr. Carroll, “Christendom College is a great work for the Church.” 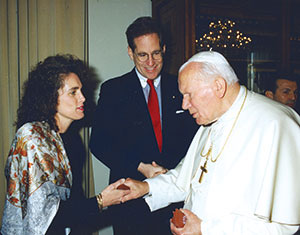 On April 8, 1995, the old Chapel of Christ the King was solemnly dedicated and blessed by His Eminence Jan Cardinal Schotte, Pope Saint John Paul II’s Secretary General to the World Synod of Bishops. Cardinal Schotte read a personal message from the Holy Father and presented the College with a chalice and paten from the Pope. When the Holy Father had given the gifts to Cardinal Schotte to deliver to the College community, he had said, “I know what they are doing there, and I want them to have this chalice and paten from me so I may be always present to them in this way. Take it to them.”

In joining The Saint John Paul II Legacy Society—including the College in your will, establishing a life-income plan, or making the College the beneficiary of a life insurance or retirement plan—you are defending those values and ensuring the future of Christendom students.

Rest assured that your gift plan will help form young men and women who contribute to the Christian renovation of the temporal order.

Other meaningful benefits of membership include:

If you have already included Christendom College in a gift plan, are contemplating a gift, or would like to discuss your options, please do not hesitate to contact me. 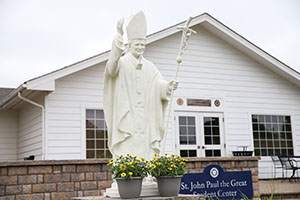